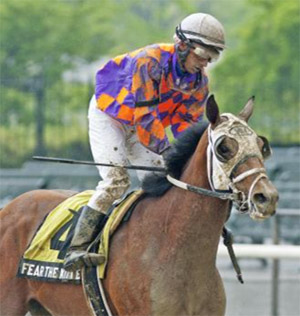 Swifty Farms in Seymour, Ind., has released its advertised fees for the 2018 breeding season, led once again by Majestic Harbor at $4,000.

Majestic Harbor, a 9-year-old Grade 1-winning son of Rockport Harbor, stood his debut season in 2017 for the same fee, and his first foals will arrive in 2018. He covered a reported 24 mares during the most recent season, tying him for fifth-most in the state.

Swifty Farms will debut two new stallions in 2018, including Fear the Kitten, who will stand for $1,000.

The 7-year-old son of Kitten’s Joy retired with 4 wins in 46 starts for earnings of $232,505. He finished second in the Grade 3 Southwest Stakes and third in the Grade 3 Lecomte Stakes, and he was an also-eligible for the 2013 Kentucky Derby.

Bred in Illinois by Ken and Sarah Ramsey, Fear the Kitten is out of the winning Dynaformer mare Dynarhythm, who is the dam of four winners from six foals to race. He is from the extended family of Grade 3 winner Relic Reward and Indian Group 1 winner Lovely Kiss.

Also entering stud at Swifty Farms in 2018 is Grade 2 winner Airoforce, a son of Colonel John whose retirement was announced in November. He will stand for $2,500.

Two members of the Swifty Farms roster had their fees lowered for the upcoming season.

Fort Prado, a 16-year-old son of El Prado, will be advertised at $1,000 after previously standing for $2,000. His leading runners of 2017 include stakes winner Prado’s Sweet Ride and stakes-placed Dr Winn Kyi and In the Chamber.

Following is the complete list of advertised fees for the 2018 Swifty Farms roster.